An excerpt from Carlos Mérida and the Mobility of Modernism: A Mayan Cosmopolitan Moves to Mexico City by Harper Montgomery, 2016.

Mérida’s paintings of indigenous women exemplified the manner in which an artist could use the “essential” aspects of painting to express the visual and material characteristics of his subjects. Mérida portrayed Indian women as entirely remote, allegorical females who were far too stylized and hieratic to associate with a desirable mestizo or Indian women in the streets of Mexico City, the stage of Best Maugard’s “exposiciones”—productions of folk and dance performances—or the musical review Peluquería Nacional. Painted as flat shapes whose serene and static character is expressed by the outlines of their profiles, shoulders, necks, and arms, Mérida’s women exist outside chronological time. Occupying neither a moment in a concrete historical time line nor the tangible present, his women instead evoke the impossible temporal register of an at-once mythical past and prescient future. The tension between specificity and myth is accentuated by the artist’s titles; further distinguishing himself from his peers, Mérida often assigned extremely specific titles to these enormously schematic paintings.

Instead of emphasizing the women’s bodies, Mérida highlights the designs and colors of their clothing. The ethnographic attention he lavishes on the collar, headband, and sash of the woman in Bucólica (left) is typical of the paintings included in the Escuela Nacional exhibition. By rendering his subjects’ clothing and pottery in detail, Mérida displayed the diversity of the Maya-Quiché people from the highlands of Chimaltenango in Guatemala. The close attention the artist paid to the angles at which women tie their sashes and headbands and to the manner in which they style their hair is also apparent in the on-site sketches he made in Chimaltenango between 1916 and 1917 and in written descriptions from his later work as a costume and set designer. By using schematic, flat, and monochromatic shapes to render the women’s bodies and heads, counterintuitive as it may seem, Mérida could call attention to the textiles and pots with rigorous detail, portraying the crafts as tangible and proximate and the women’s bodies as remote and inaccessible.

In contrast, [Saturnino] Herrán clothes his women in costumes that underline the carnal nature of their bodies. This sensuality is further enhanced by the fact that they would be legible to contemporary viewers as modern urban mestizas donning costumes not their own. Mérida expresses the modernity of his subjects, in contrast, by emphasizing the flatness of the surfaces of the forms in the painting and the opaque, local nature of his colors in a mode of working analogous to that of the indigenous weaver. Mérida’s use of borders, in particular, emulates indigenous motifs, referring not only to architectural niches and to the fashion for indigenous-nouveau design but also to the surfaces of textiles. The borders also create a slight depth that accentuates the flatness of the figures. Mérida’s formal choices in these works align painting with the decorative arts, foreshadowing his migration toward the graphic arts during the 1930s and early 1940s 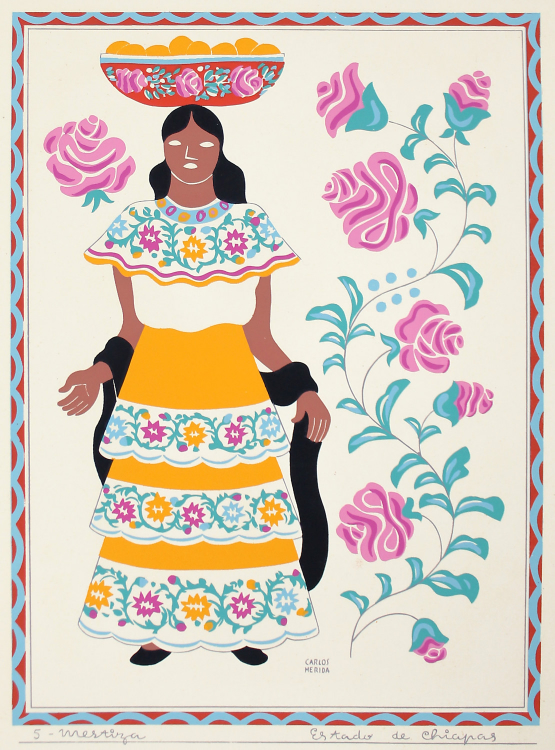