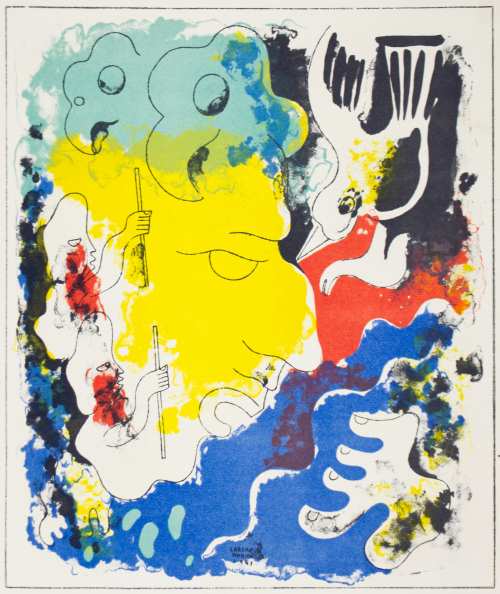 Mérida took a Maya sacred text, the Popol vuh, as the inspiration for a set of ten lithographs that appeared as a portfolio in 1943. The portfolio layered the lithographs with translucent pages printed with relevant fragments of text from the Popol vuh in both Spanish and English. Mérida's introduction outlined the history of the text, which he called "the most profound but poetic testimony we possess about the divine word of our grandfathers, the creators of the highest ancient civilization in the New World.' He described the images in the portfolio not as illustrations, but "free poetic versions of mythological wonders." Two nearly identical figures represent the semi-divine heroes of the Popol vuh, whom Merida shows confronting various abstracted creatures in episodic scenes. The prints are not only surrealist in terms of aesthetics, but also in their use of fantastic imagery and their exploration of myth, one of the fundamental elements of the Surrealists' attraction to non-Western cultures.' In Estampas delPopol-vuh Merida fused Surrealism with pre-Columbian aesthetics and subject matter to create a personal meditation on his Maya heritage. Later projects drew on the history of other Mesoamerican cultures including the Aztec and the cultures of West Mexico.

The lithograph shows the two heroes of the Popol Vuh legend seated in the lower right corner of the page. Their knees drawn up, they hold pipes or flutes in their hands as lightning flashes across the sky. A much larger figure and a gigantic birdlike creature—perhaps a reference to the feathered serpent, which appears throughout the Popol vuh confront each other in the space above. The monstrous creatures, ambiguous spatial relationships and liberation of color from line in Mérida's lithographs link them to biomorphic Surrealism at the same time that they are firmly grounded in Mérida's studies of Maya history. 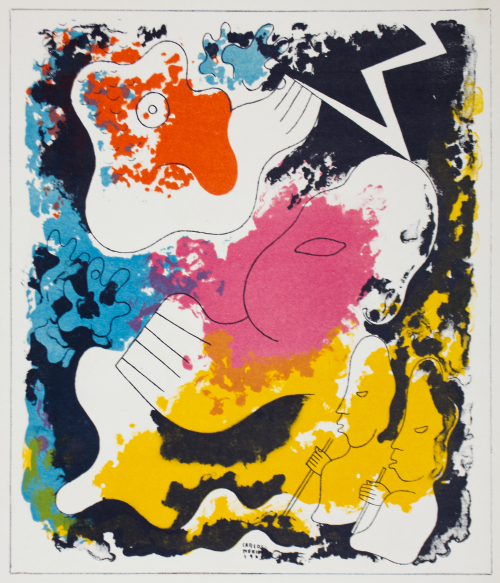