The Many Colors of Mirel Fraga 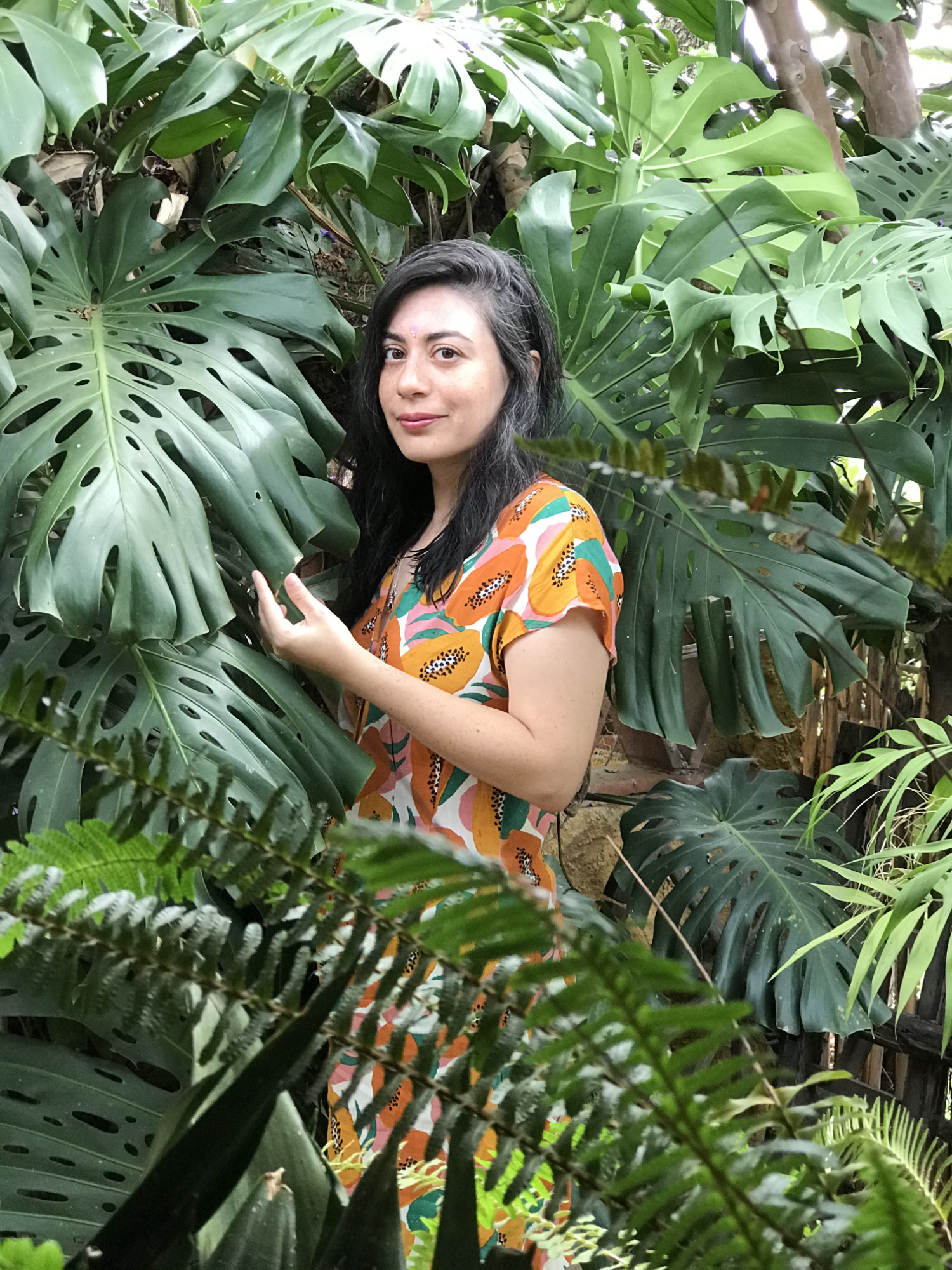 An interdisciplinary artist with an endless curiosity about nature, and an appreciation of ancestral cultures, Oaxaca-based artist, Mirel Fraga, creates art that is both inventive and deep, playful, yet thoughtful. Through a vibrant palette, her work synthesizes her interest in science, cosmos, the origins of life, and spirituality; thus, posing questions about what's most essential to our being. Her objects, animals, plants and landscapes live freely in a place between painting, illustration, design and Mexican popular arts. She has a communication with abstract and figurative art from the present and the past, of western and non-western origins.

The Influence of Mexican Popular Arts and Design in Her Work

The Oaxacan traditional arts have been a great influence in her work. Aiming to learn more about artisanal techniques, she moved from Puebla to Oaxaca. Here, she worked at an artisan workshop in the village of San Martín Tilcajete, which is internationally renowned for the alebrijes: multicolored and delicately crafted wood carvings, which depict fantastical animals: hybrids of multiple species, real and imaginary. As the artisans welcomed her and taught her the techniques, her whole artistic panorama broadened up; the shapes were perfect, but what caught her eye the most was the use of color. The art of these communities impacted her deeply, as she describes it, “you can see it in my work: in the shapes, the colors, and in certain psychedelic elements, because I think they [the alebrijes artists] have a psychedelic side”.

It is easy to perceive some other artisanal aspects in Mirel’s art, such as precision, patience, sense of community and symbolic meaning. Many people still think of an artisan’s work as inferior in comparison to an artist’s, but Mirel shows us, one more time, that the boundaries between the two are often blurred. When thinking about the particularities of these two categories, perhaps what mostly makes the Mexican popular arts stand out, are the community’s traditions, which are passed from one generation to another. This heritage is likewise present in traditional textiles, which have also left a mark on her work, after she collaborated with the Textile Museum of Oaxaca, spending many amazing hours cataloguing the collection.

After graduating from the faculty of Design, working with digital media was a natural way to start creating professionally, at the beginning of her career. As the years passed by, she switched to hand-made and analogue techniques, especially when she collaborated with other artists, artisans and designers at the Center for the Arts, in San Agustín Etla, and as a member of the collective Miku Meko, in Oaxaca City. An academic education in Fine Art is never a requirement to become an artist; she explains that even though she doesn’t have it, nor has studied History of Art or the Old Masters, she never hesitates to experiment with techniques, that’s why sometimes she considers herself a creator whose work is closer to an artisan’s. Most of all, her art escapes definitions, but rather flows between a wide range of influences; you could extract elements from her artworks and easily translate them to other creative languages: ceramics, sculpture, textiles, jewelry, and so on. 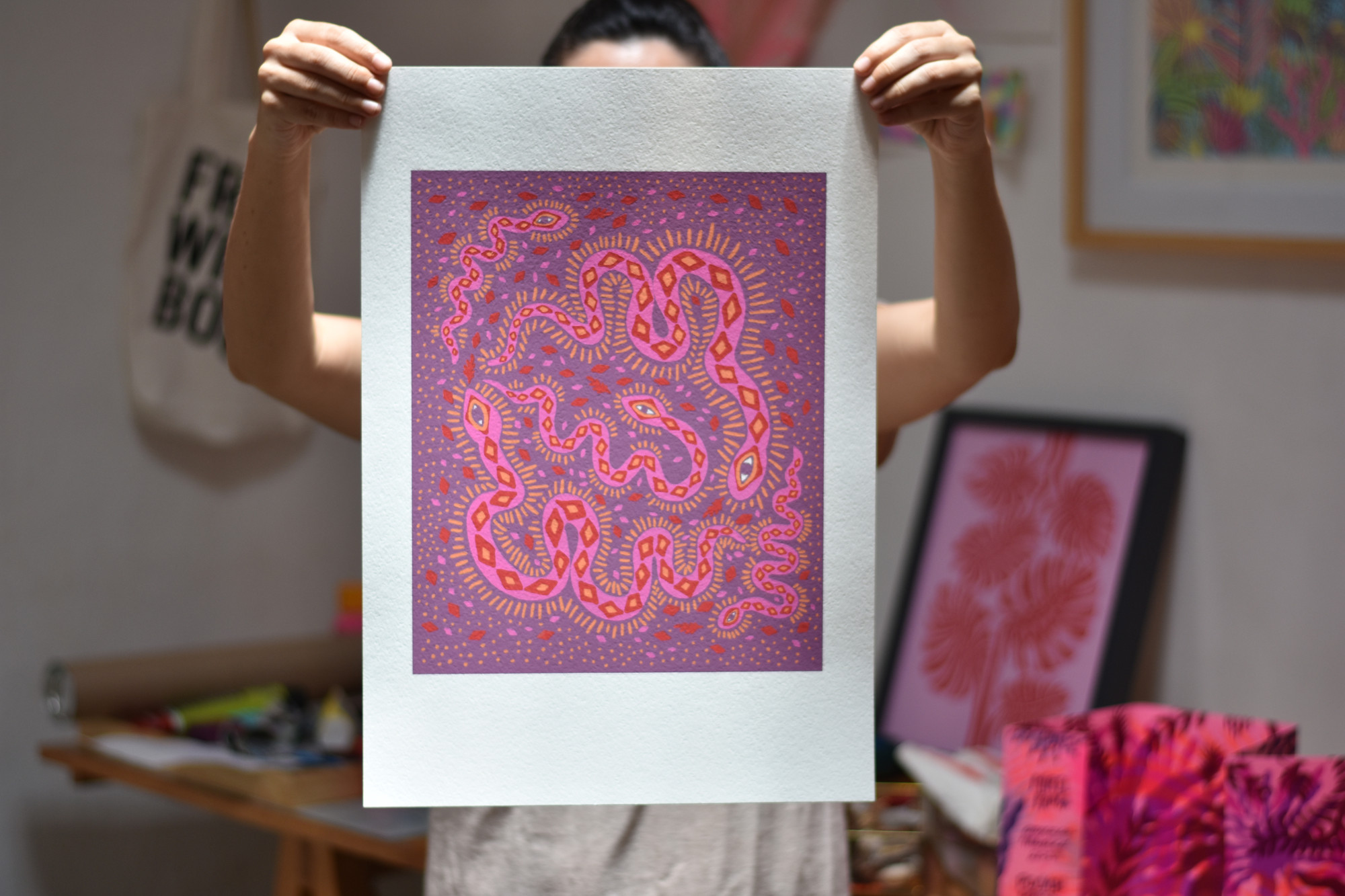 Her relation to colors is central in her art. Even though the artist describes herself as a simple and moderate person, it’s her colorful alter ego which manifests and draws us into her world.  As she confesses, “as much as I try to avoid saturated colors, I always go back to them, because they nurture my spirit”. She displays color harmonies, which encompass the colors of the visible spectrum (red, orange, yellow, green, cyan, blue, violet), and the base of her palette, fluorescent pink, which is a non-spectral color; a tone that vibrates in her in a special manner. The result is a set so vivid, it makes you stare at it and hypnotizes you for a little while. It makes us think about the principles that link science and art: the Color Theory and the color wheel by Isaac Newton, who demonstrated that color is a quality of light, having properties in common with both particles and waves.

Even though she doesn't assign specific meanings to colors, when she prepares a color she always wants it to work well with the others. This is to say that, when she is painting, she’s on the quest for a certain feeling, the colors need to vibrate in a certain way that they generate a specific state of mind that brings her joy; in her words: “looking at them together gives me pleasure. In a certain way, I need to see them in order to feel happy”. She recalls the moment when she saw the Cosmic Visions exhibition assembled for the first time: “I cannot express how happy I felt, it was like being in my own world”. Color is her connection to science, cosmos and spirituality. 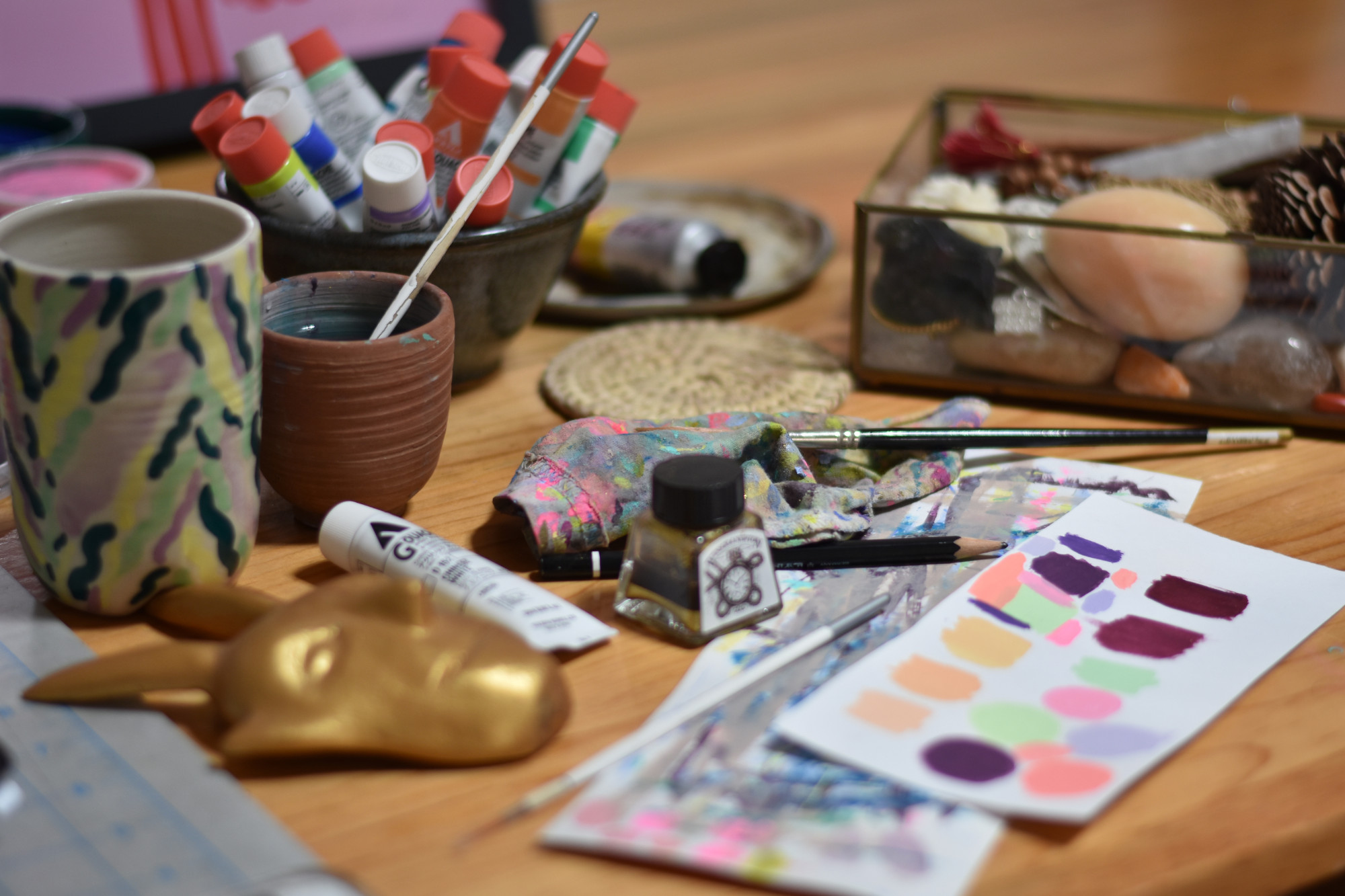 Mirel recognizes a psychedelic side in her oeuvre, which is an echo of the counterculture movements of the sixties, an era that established the foundations for current alternative ways of thinking and living. Expanded consciousness, mysticism, a sense of togetherness, facing the dystopia of capitalism and modern life. Setting the mind free embraces Asian philosophies and indigenous cosmovisions. As visual exercises, Mirel takes images from symbol books and assembles them in a structure that makes sense to her, although it may seem random, it creates a perfectly balanced world. Sacred mountains, pyramids, hills, serpents, stars, “how come these elements are repeated in so many cultures?”, she wonders. Hence the title of her show Cosmic Visions, although they are imaginary depictions, they are built on a real curiosity about where we come from. These explorations are part of her everyday life; in Oaxaca, Mirel was part of a Buddhist study group; recently she started to read the Tao Te Ching at home, and she reveres the ancestral knowledge of spiritual plants and fungi. 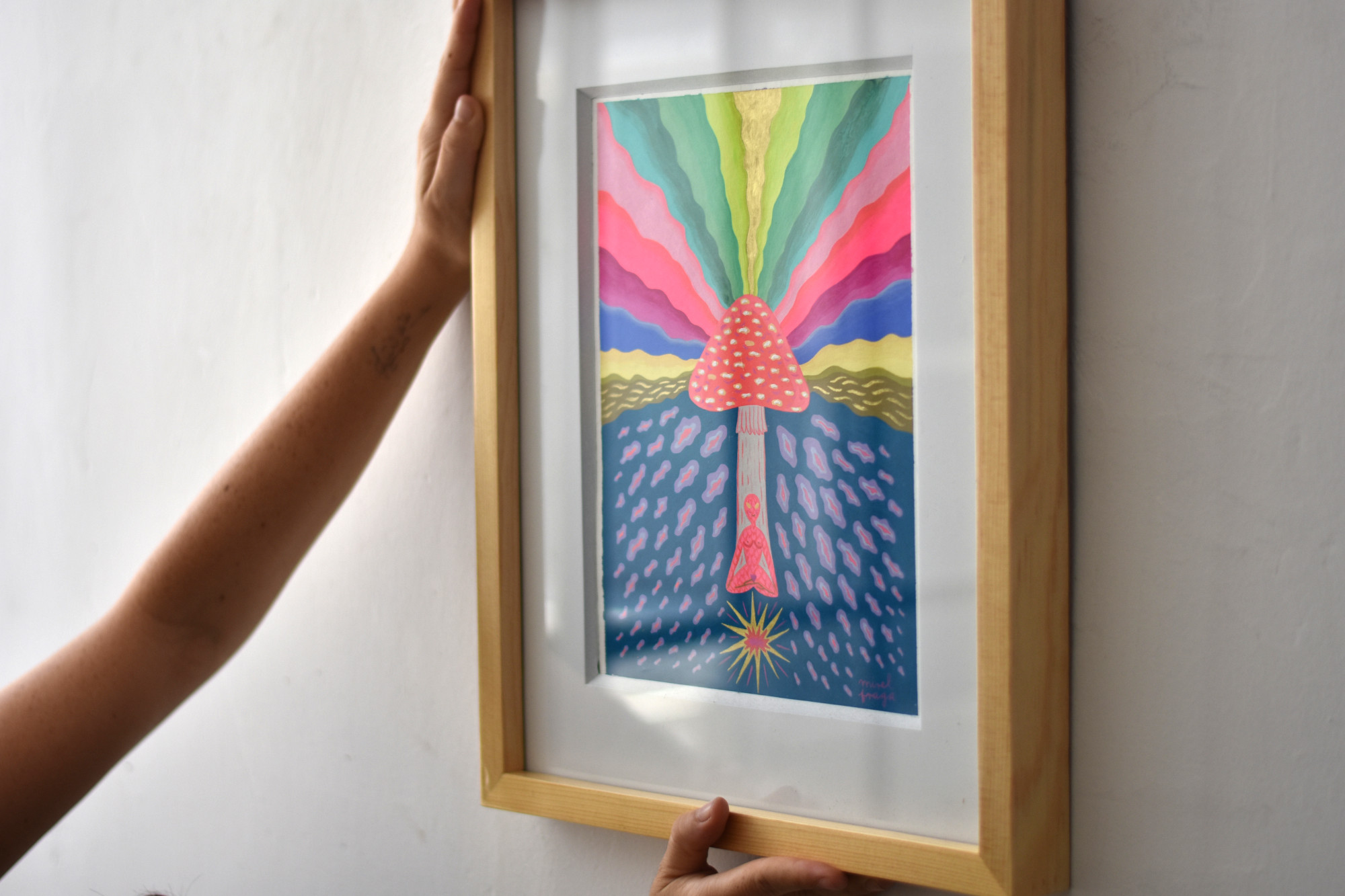 Cosmic Visions is a project that Mirel developed in lockdown, during the most algid months of the pandemic. Mirel’s interest in the cosmos started years ago; though, it remained dormant until 2020, when she was spending a lot of time working alone at her home-studio, listening to science podcasts, talks and documentaries, such as Carl Sagan’s series.

With the movie La Plànete Sauvage in mind, Mirel made a self portrait: Cosmonaut Hearing The Universe, an alien humanoid who explores planets, black holes, galaxies and landscapes in outer space. The galaxy M83 has a personal meaning to her, “My name’s Mirel and I was born in ‘83, so when I learnt that there’s a galaxy called M83 I went bananas”. The universal shape of the spiral is an element that Mirel consciously brings up to enhance harmony in these cosmic pieces; its brightness reminisces the pyrotechny in Oaxacan popular celebrations.

Her pieces called Reality Tunnels, were inspired by the pioneer of abstract art, swedish painter Hilma af Klint, whose work was also very personal and spiritual; she didn’t let anybody see it before she died. A term coined by the psychologist Timothy Leary, was another reference Mirel took for these paintings. According to him, each person has their own unrepeatable reality tunnel, as the artist explains in fascination, “Nobody will ever live the same life you’re living right now, everything is reduced to that tunnel”. Mirel’s work resembles that of the french artist Sonia Delaunay, who also gave much importance to colors, geometry and the cosmos, and like Mirel, kept a constant connection between disciplines, such as graphic design, painting and textiles. 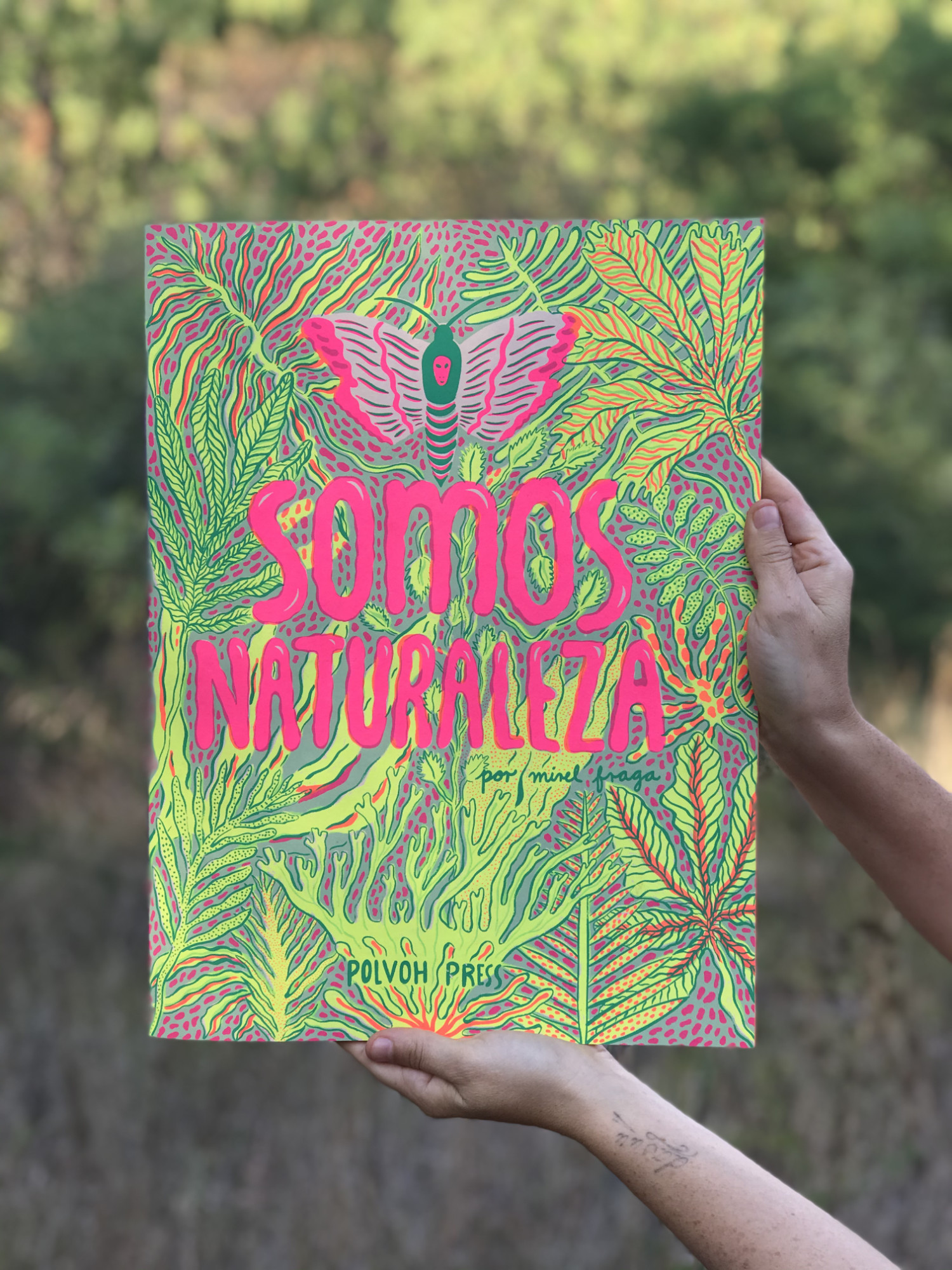 During lockdown, Mirel also worked on a more earthly level; she made the book Somos Naturaleza, a collection of fluorescent flora and fauna, mixing reality and fantasy. In her depictions of plants, she synthesizes their morphology. One of the animal specimens is the anglerfish, which has always been on her mind. One of her favorite childhood memories is at the school library, reading a book about abyssal creatures and another one about miniature gardens. In more recent days, after reading an article on a theory about octopuses coming to earth from outer space on a meteorite, she decided to include them, because, according to this theory, they might merge the two worlds: Earth and cosmos.

With the intention to overcome the fear of expressing her ideas, she wrote a pandemic manifesto, which was included in the publication; she recalls: “I made that book for my loved ones and myself. As my true self was revealed, I felt vulnerable, but that’s the way I am”. The artist reminds us that saving our planet is, actually, saving ourselves, “as we are nature, we don’t need to connect with it. We already ARE it”. According to her, because of the capacity to give life that women have, we have a stronger and deeper understanding about this fact.

Mirel’s art is highly stimulating for the eyes and for the mind. It takes from a wide range of traditions and disciplines. She makes us stop and think about what’s beyond our noses and above the sky, and within our bodies; her art awakens in us the capacity of amazement and the curiosity to flow with our nature, which is the whole universe.

Karina Ruiz Ojeda has a MA in Art History, is an independent researcher, art and music curator. She also teaches Spanish as a second language. She lives and works in Oaxaca City, Mexico. 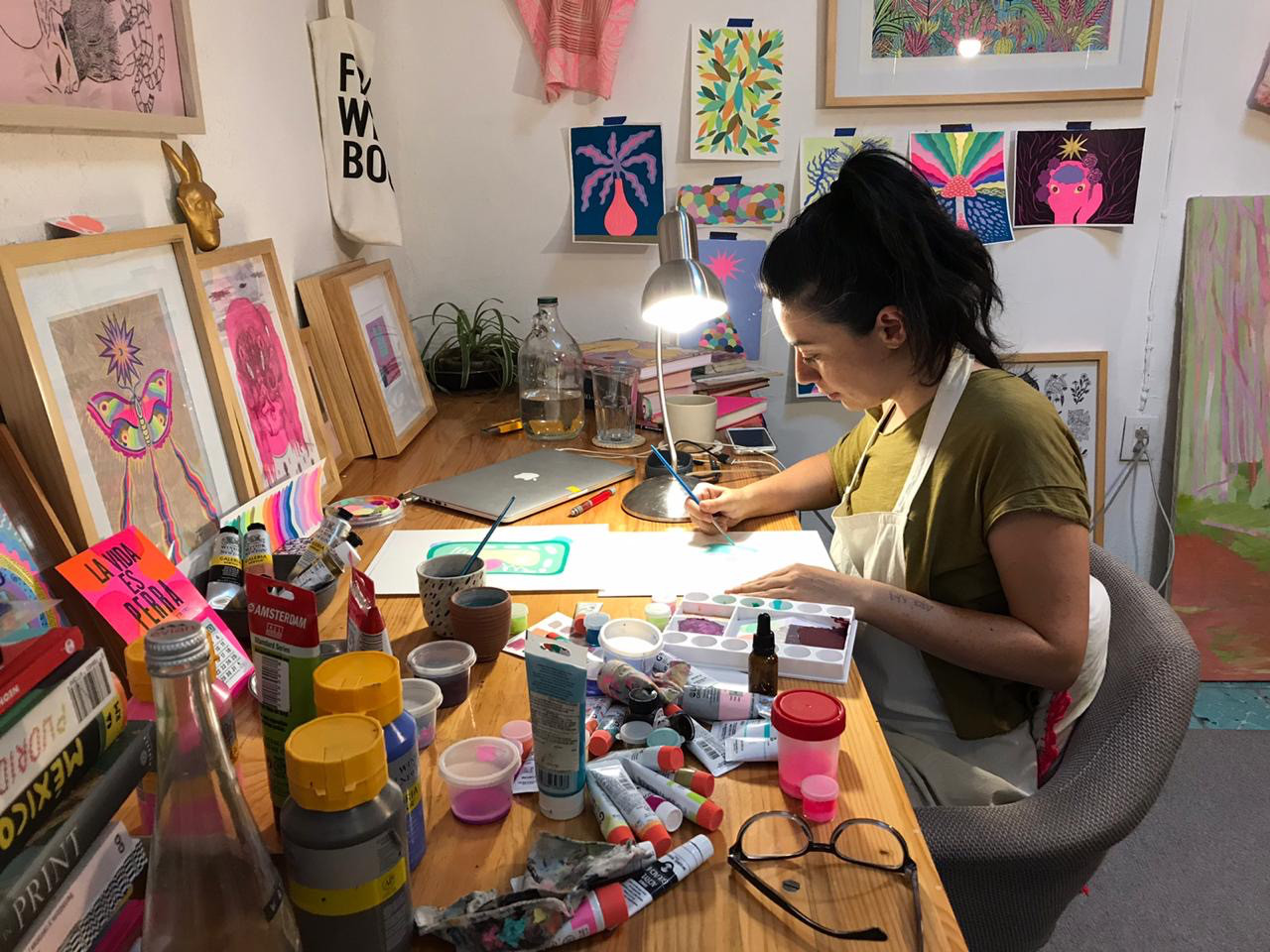