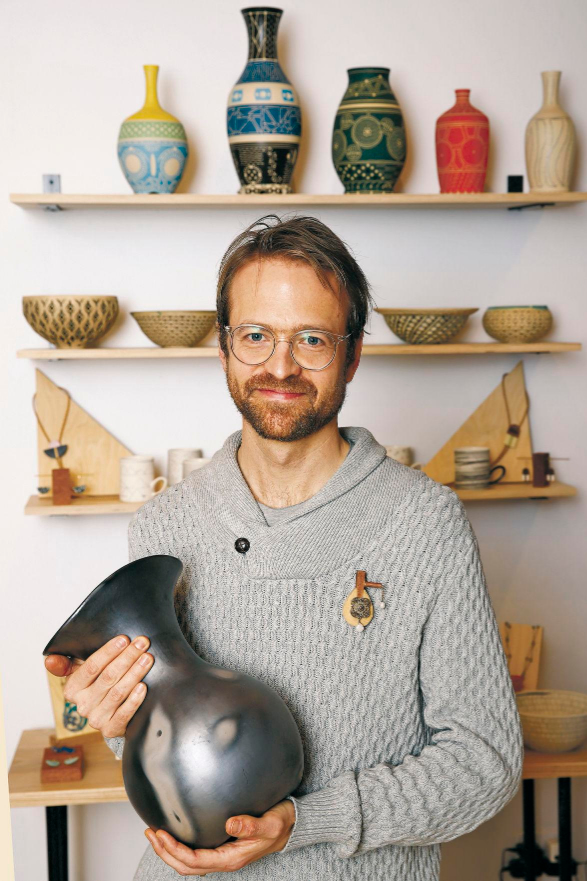 Something about Santa Fe draws people and keeps them here. Call it the magic of place. Maybe it’s some property of the base layer of obsidian that some say lies beneath the city.

Frank Rose, owner of Hecho a Mano, came here from Houston in 2008, without much of a plan. And he went from being a salesperson in a gallery to a two-time gallery director to the proprietor of his own art space. That rise to the top was thanks to a combination of determination and an embrace of uncertainty.

Rose, who was raised in Anchorage and Seattle, moved with his family to Houston as a teenager. After high school, he had every intention of becoming a studio artist and enrolled at the University of Houston to study photography. Then something happened in his senior year that lead him on different career path.

“I had an installation class, and we had to find a place outside of the university to put up an installation,” the 39-year-old says. “A friend of mine was running a salon in the museum district in Houston, inside his house. He had a kind of extra living room that he would use as like an entertaining area. I asked if I could do my installation in there, and he said, ‘Go for it.’ My wife’s a photographer, too, and he said, ‘What if you just did a two-person show?’ ”

The Houston Press picked up the event, and more than 200 people attended the opening. “I’m sure most of them had no idea who we were but just read about it and showed up,” he says. That inspired Rose and the salon owner to start curating other shows in the space. “That kind of planted the seed of me wanting to go in this direction of holding space for other artists. It is a very creative practice for me, but I’m not making things. My work became more about supporting other artists. I found that I liked it and I was good at it. I just kept digging into that.”