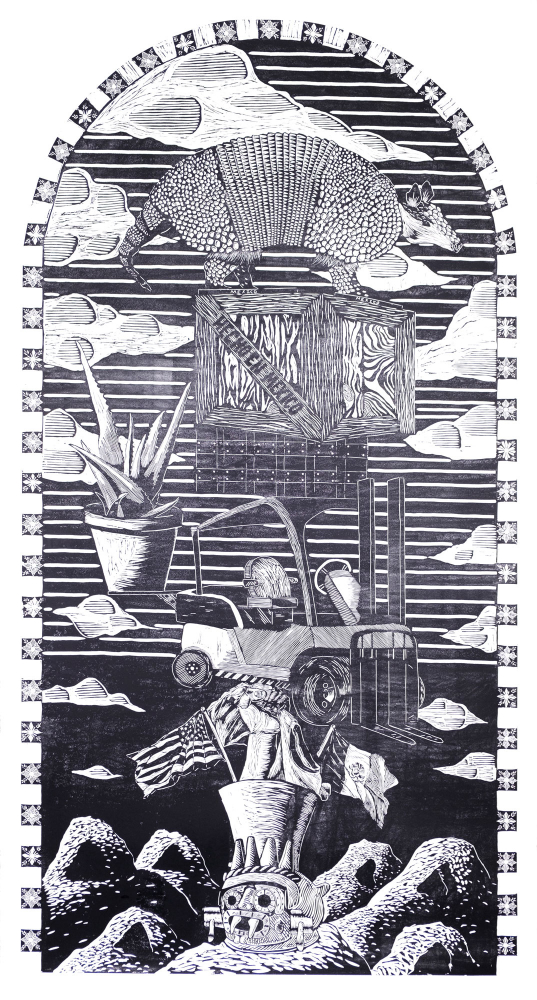 In his black beanie and Vans, the 25-year-old looks like he would be equally at home in a skate park. (A line of t-shirts he designs under his Casa Press label is sold at skate shops like Rec Shop in Dallas.) But the art world suits him. He just completed a series of six wooden panels, 8 feet tall and 4 feet wide, that have been on display in his hometown at the Art Center of Corpus Christi since the beginning of March. The “Endless Endeavor” series took him more than a year to complete. Each panel represents a different chapter in the evolution of Muñoz’s family, from the emigration of his paternal grandfather, Alberto, to the birth of his daughters, Jane and Florence.

It is only as I finish the interview and watch him wrap a used woodblock in paper that I realize he is missing several digits on his left hand. When I ask him about it, he tells me he was born without the fingers, and that he considers that a blessing, as opposed to losing them later in life, when it would have been harder to adapt.

“I tell my wife that I actually want to do this series of woodcuts, but I’m probably never going to do it because it’s too vain,” he says, laughing. “I wanted to do a series of almost Biblical carvings of me, in heaven, with like a David-type body. I’m 7 feet tall and have 10 fingers. But as God was creating me, he realized this is too powerful of a person. So he took my fingers away and took inches off my height. Then he sent me down to earth, so that everybody else would have a chance.”