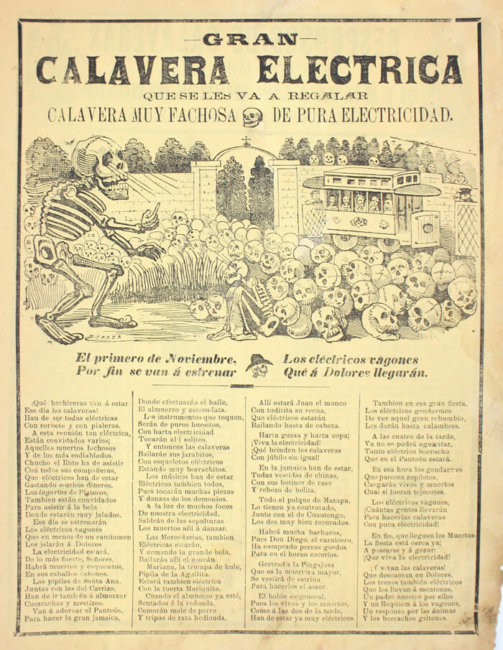 José Guadalupe Posada is thought to have said “death is democratic.” Through his years as a printmaker, Posada’s work was distributed widely and seen by all classes of people in late-19th and early-20th century Mexico. Well known today for his images of “calaveras,” or skeletons, Posada often used these figures as satire and timed their publication with Día de los Muertos.

Gran Calavera Electrica, for instance, celebrates the extension of a Mexico City trolley-car line around Día de los Muertos in 1907, the year it was printed. The caption reads: “On the first of November, like racing devils they will run—the electric carriages that will arrive in Dolores” (a street in Mexico City).

Posada was sometimes mythologized as a revolutionary by Diego Rivera and other printmakers of the mid-20th century. While Juan José Arreola said that Posada’s engravings were “the first bullets of the Revolution,” a closer inspection of the broadsheets containing his amazing depictions of Zapata tells a different story. One of the texts states, “Zapatismo is the worst you’ll find, it is the baddest seed.” In another, he is compared to Attila the Hun. If anything, Posada’s works repudiate rebellion of any kind.

It must be noted that Posada was a commercial artist, working under the direction of his publisher. His longtime patron A. Vanegas Arroyo would not have been as successful if he ran a revolutionary press. It is difficult to say with much certainty what beliefs Posada genuinely held. None of this should diminish the perception of his ability as a satirist and illustrator. He continues to have a massive influence on Mexican art, and perhaps his political stance is irrelevant. Like most historical figures, it is his mythologized being that holds the greatest power.