Jose Guadalupe Posada and the Myth of the Revolutionary

Humans are great at changing facts to fit our own personal narratives. We like to cherry-pick the evidence, removing it from the context which tells a more truthful, if less tantalizing, story. This tendency was expressed by Diego Rivera when he proclaimed José Guadalupe Posada the “guerrilla fighter of the broadsheets”.

The myth of Posada as a champion of the Mexican Revolution is perhaps most clearly on display is in Leopoldo Méndez’ 1956 linocut, Homage to Posada. Posada is depicted as an artisan-revolutionary and summarizes the critical example of Posada to the Taller as a creator of popular, socially conscious art. This idealized image shows Posada at work, burin in hand, preparing a plate through laborious hand engraving. He contemplates a scene of violence outside his window, representative of the abusive regime of dictator Porfirio Díaz. Waiting expectantly behind Posada are his printer and the Flores Magón brothers, two early Mexican revolutionary thinkers, one of whom holds a tract denouncing the practice of conscripted labor.

The scene is entirely imaginary.

Perhaps it was this print that associated Posada with El Hijo del Ahuizote (the most progresive newspaper of the period) run by the Flores Magón brothers. Scholars have found no evidence that Posada ever contributed to the publication.

The scene of violence outside the window and being reproduced on Posada’s plate was in fact taken from an 1892 engraving criticizing “troubles and disturbances.”

While Juan José Arreloa said that Posada’s engravings were “the first bullets of the Revolution,” a closer inspection of the broadsheets containing his amazing depictions of Zapata tells a different story. In one the text states, “Zapatismo is the worst you’ll find, it is the baddest seed.” In another he is compared to Atilla the Hun. If anything, Posada’s works repudiate rebellion of any kind. 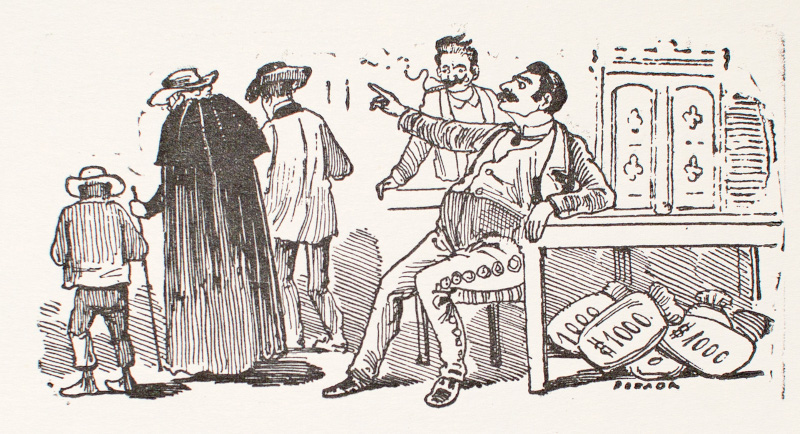 Posada rarely criticized the Diaz regime, thinking of Diaz a sculptor of liberty and peace. Francisco Madero, the anti-Diaz revolutionary, was the politician who came under fire most from Posada. However, while he did not condemn the regime, the society under it was usually shown lacking in the liberty and peace its ruler sought through violent repression.

It must be noted that Posada was a commercial artist, working under the direction of his publisher. His longtime patron, A. Vanegas Arroyo, would not have been as successful if he ran a revolutionary press. It is difficult to say with much certainty what beliefs Posada genuinely held. None of this should diminish the perception of his ability as satirist and illustrator. His influence on Mexican art continues to be massive and what his personal political stance is perhaps irrelevant. Like most historical figures, it is his mythologized being that holds the greatest influence.